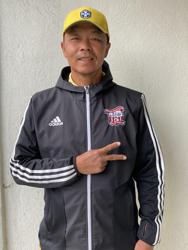 “Soccer for Social Change - Soccer is a life skill for personal development and societal transformation. It’s an international language that connects us all in the spirit of play.”

“Football has to be fun for kids or it doesn’t make sense.”

Sirch has played soccer since 3rd grade in upstate New York. In High School he was an all season athlete. He tried out as a walk-on and made the SUNY Binghamton University Men’s Soccer team, which at the time was a huge personal accomplishment for Sirch. Unfortunately the demand of his engineering program and full time soccer was not possible to maintain, and sadly had to let go of playing.

His passion for soccer came back to life after his son started playing in 1st grade in 2013. Together they watched the televised games of the 2014 Men’s FIFA World Cup hosted in Brazil. Inspired by this, he started playing pickup soccer, coaching his son, and eventually his daughter too. The Chanthyasacks have been a full-time soccer family for the past five-plus years. Sirch decided to change up his career, returned back to school, and completed both the Youth Worker and Community Health Worker Certification programs at Ocean Campus, City College of San Francisco with a 4.0 GPA.

Today Sirch works full-time as a head recess coach at SFUSD Alvarado Elemetary School in Noe Valley. He plays “street soccer” with the kids on the blacktop every recess.  He works part-time for SF Recreation & Parks after school programs as an Archery Instructor at Summer Day Camps "Camp Mather".

He enjoys introducing the beautiful game to children. His hope is for every player to have fun. It’s important for Sirch that both personal & player development occurs in their soccer journey. He wants the players to challenge themselves to get better everyday, come to each practice/game with a positive attitude, open heart, mind, and willingness to grow, becoming comfortable with the ball, learning to share the ball, and moving without the ball.