How Our President, Libby, Fell In Love With Soccer

When did I fall in love with the Beautiful Game? 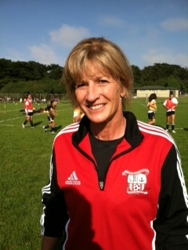 I was 10 years old when my family moved to Portola Valley from Tucson. My dad saw the signup for AYSO in our neighborhood, and signed me up for soccer, so that I could make some new friends. There were kids on our street that also liked to kick a ball, so often we would walk down the hill to Rossotti field and make a pick-up game. We liked to play a variation of the regular game, where whomever happened to be in the goal box was the goalkeeper, because that allowed everyone to have an attacking opportunity, and since we were neighborhood kids without scrimmage vests or goalkeeper gloves, this worked great all summer long.

When August came, and I received my uniform, I was so excited to play, I wore my jersey to bed. The next morning. we drove to the Woodside Priory for my first game. I will never forget when our goalkeeper was beaten and I ran behind her to catch the ball from going into the goal. I thought I was a hero, but instead it was a penalty kick. All the parents yelled at me, but my teammates were very kind, and I didn’t give up the sport.

I kept joining up every season, all through middle school and then at Woodside High School, I was the defensive MVP my sophomore year. The next year, my family moved north to Mill Valley, and I was shocked that there was no soccer for girls who were 16 years old. I was going to have to play with the boys if I wanted to play. That is when I became a forward, because the coach didn’t want a girl in the defense, but it was ok for me to be on the wing and run and cross the ball. I just wanted to play, so I learned the humility of going from playing the entire game, to playing 15 minutes a half. It was ok because there was still practice time and my school soccer team.

It was at Tamalpais High School field that I met the love of my life, who was as crazy to play as I was, so we had work-out dates, where I would cross the ball to him, until he missed his shot, and then he had to cross to me until I missed the goal. By this time, Mill Valley had gotten enough interest to form a U19 women’s team. We thought we were a fairly strong squad, and a team from Sweden was coming to play us. It was very exciting to meet the Swedes at the airport and host some players. Then it was time for the game. Wow, I had never been beaten 0-8 before and realized there was more to learn about teamwork.

The next year, we traveled to Sweden to be hosted by this Stockholm club. The World Cup was going on in Spain at the same time, so after our games we would watch the matches with the Swedes. When our tournament ended, there was one week before we flew back that some players were going to training camp with he Swedish team, but Toby said “hey if we get on a train right now, we can make it to Madrid for the World Cup final, and they are selling standing room tickets in 2 days”. I was the only person that thought that was a good idea, so the two of us rode a train for 2 days to Madrid. Then Toby stood in the hot sun to buy tickets to the final, and told me to go have a swim in the Real Madrid pool , which was next to the Bernabeu Stadium. I knew then that he loved me. On the way back to the States, our teams had a layover in London, and I had been watching “Road to Wembley” early Sunday mornings, and had picked Tottenham Hotspur as my favorite team, so I rode the bus across London to buy my first Spurs jersey at White Hart Lane and almost missed the plane. I was the last person to board, but I had my Spurs jersey!

I got involved with Vikings when my son was 4 years old, and he said “Mom, I am tired of going to your games all the time and when can there be a game for me?” So I looked in the phone book for soccer and found the Vikings Soccer Club. When I went to the office to sign up my son, they told me he was too young and to come back when he was 7 years old. I told them that I wanted to help start an under 6 program, and that is how I came to start the microsoccer program. I had a couple friends with kids, and they knew some friends, so I thought it could work. The Vikings gave me some money to purchase small goals, and I also bought some poster board and popsicles. When the kids showed up, we made each group write their team name on the poster board, and then we made a parade around South Sunset field, and played a game and ate popsicles. That was the start of microsoccer. It was so much fun to watch the kids come and have their first soccer experience, that somehow even when my son moved on to a travel team, I still wanted to volunteer for the microsoccer program. I think that was from my dad’s example of still volunteering for AYSO as a referee. 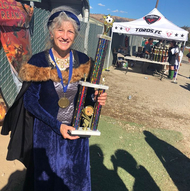 At this point in my life, I can give more to the game as a mentor than as a player, but that doesn’t mean I am ready to give up trying to play! I am fine with looking silly and giving everyone a laugh at the old lady who loves to kick a ball. I am still trying to play soccer, with the Vintage Vikings in the Golden Gate Women’s League, and with Leahi Hawaii as a tournament team. I can’t run as fast as I used to, and my legs are no longer strong and pretty, but I love being part of something bigger than myself. I love the exhilaration and the frustration of a team sport. I have learned humility and the value of shared effort for a common goal.