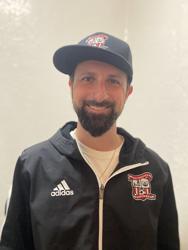 "You can't score if you don't shoot!"

A native of San Francisco, Coach Cadam has played for Vikings when he was a kid, attended Summer Camp, then worked for the Summer Camp and now coaches Vikings teams. Forrest grew up playing for the Vikings from the ages of 6 – 17.  Along with a lifelong understanding of the San Francisco Vikings Soccer Club, Forrest brings a wealth of experience as a player, coach, and 15 years as a Grade 8 referee.

Forrest first attended Skyline College where he played with fellow Viking coaches Joey and Danny for two seasons. Upon completing his collegiate playing career at Skyline College, Forrest joined the Vikings Men’s team where he helped promote them into the Major Division of the SFSFL. During this time, he also finished his BA in Liberal Arts at SFSU and served the soccer community as a coach at the Vikings Summer Camps, futsal nationals, and as a yearly volunteer at SFVSC tryouts.