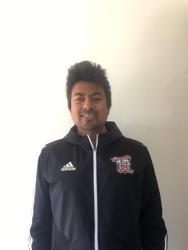 A San Francisco native, Danny Cardoza actually played on the same High School Varsity team as coaches Joey Almeida and Forrest Cadam. Dany has also played for the Vikings men's team and played as a goalkeeper, midfielder, and forward for a number of years. He has now been a coach with the Vikings for six years.

Danny attended San Francisco State University and received his B.A. in Political Science. He then went on to Middlebury College where he earned his Master's Degree in Spanish.

Currently, he is a Spanish teacher at the Urban School of SF and he also coaches the boys' varsity soccer team as well as the junior varsity girls.