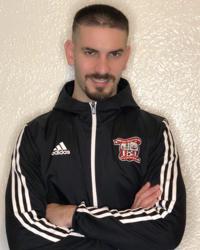 Majdi started playing soccer when he was five years old in the streets of Aleppo. At the age of nine, he joined the Salesians community and started playing for their team.

During a game against Al-Jalaa (official club in the second division of the Syrian league) Majdi received an invitation to play for their team. He attended for a season and played some friendly games, but the level and sportsmanship didn’t meet his expectations. Therefore, he left the club and stayed with the Salesians.

At the age of 16, his team was invited to participate in the PGS (international Salesian sports games) which took place in Italy 2004. He played for his high school during school tournaments after coming back from Italy in 2004. He stopped playing professionally that year at the age of 17 in order to focus on his studies.

Majdi started studying French literatures at the university of Aleppo in 2006, finished in 2010, and received a teaching diploma in 2011. He worked as a French teacher for four years. While working, he also earned his Masters Degree in French translation in 2015.

Majdi came to the United States in 2015 because of the war in Syria. He has an uncle who lives here, who helped him with the move.

Majdi has a USSF "D" License in soccer and coaching and animator certified with the Salesians for summer activities for youth.