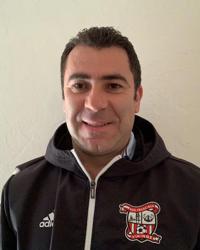 "My goal is to help individual players develop their skills and foster a positive, fun environment and supportive atmosphere so that every player has a great opportunity regardless of ability; because every member of a team deserves to be treated with encouragement."

Kamel Sebbak was born in Algeria, and speaks Berber and French. In his free time, he likes to spend time with his family and coach his son in soccer.

In Algeria, Kamel played both high school and college soccer. He played for the college in Maatkas from 1999-2001. While he was at college in, he pursued a degree from the Algeria Law School. Once in America, Kamel furthered his education at Berkeley Community College.

Outside of college, Kamel also played proffessionally for Club Sportive Mattkas Algeria from 1991-2003. He played in the competitive league 1 from 1993-1997 and the national championship league 3 from 1997-2003.