Inspired by the Game, by Coach Barbara Moulton

There are few things more rewarding to a coach than seeing her players improve, whether incrementally or in big leaps. On the practice field, or during a game. Whether my team wins, loses or ties, I look for the ways they improved over the last game. How an individual took more shots or tackled more balls or ran faster to the ball than we have seen her run before. How the team held their positions, covered for each other, and worked with the GK to defend our goal. Sometimes it is better communication on the field that improves the game, sometimes it is keeping your head up after a mistake. It is natural to feel great after a win, but we rely on skill, athleticism AND luck. So we should always be looking at improvement as a barometer for success.

I came late to soccer and to coaching. When my son started playing with the Y at 5, his first session was coached by an amazing 90-year-old Italian man. He was small and spry of figure with sparkling blue eyes, he was a soccer sprite. I was entranced by the beauty and simplicity of the game and when my son's class formed a team the next year I became their coach after getting my coaching license from long-term Viking Toby Rappolt. The talent on my team was such that many went on to play college ball. I learned so much from those boys. My daughter also started at 5 with the Y, with me coaching, but I soon moved her over to Microsoccer. She eventually joined the SFVSC at 10, first with Fernando Picazo and then with Carlos Escobar. I assisted the teams and these coaches were my mentors.

Fernando was a great player and always used the Player First mentality. Carlos always brought great positive energy and amazing game intelligence to every training and game. In those years, each Viking age group practiced together on adjacent quarters of the field, and ours had four teams, so I was exposed to the coaching styles of 4 coaches twice a week and learned a lot from Fernando, Carlos, Libby and Jeff. Since I had a coaching license I would sub for people and Jeff and Libby ultimately offered me my own team. Since then the Vikings Club has supported my growth as a coach with licensing courses and soccer development every year for the last 8+ years. Over the years I’ve learned that we get the best from them by being respectful, encouraging, and consistent.

My aim is to contribute to the growth and development of every player, no matter where they begin. Players need to develop relationships with others in order to succeed as a team. Helping kids see and understand the game and learn to read the next likely play is exciting. Perhaps more importantly, I want to model good sporting behavior, respect for players, coaches and officials, and a positive spirit whether we win, lose or tie.

In my years with the Vikings I have coached a range of ages from high school to 7-year-old girls, and this year I am coaching kinder boys, 8-year-old girls, and 10-year-old girls. Each age group has its own rewards and challenges. High school girls can often execute a perfect curved corner kick, but also would rather go to a prom party and not show up for their game the next morning. Middle schoolers tend to have great team spirit, but a coach needs to be mindful of cliques even on the best team. The youngest players can clear a ball from defense to their scoring goal on the smaller pitch, but have trouble remembering whether they are left or right wing, and "which is the left side anyway?"

I find a lot of joy coaching kids, and hope to inspire them to be good people as well as good players, to create a life-long love of the game, and to find enduring friendships with their teammates. At 24, my son is still in touch with several of the boys from that long-ago team of 6-year-olds, the Clarendon Vipers. If I am lucky with my health, maybe someday I will be a spritely 90-year-old coach inspiring 5-year-olds to dribble and their parents to get involved in the beautiful game. 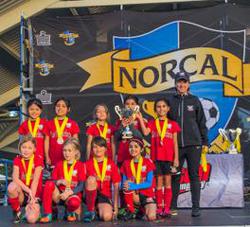