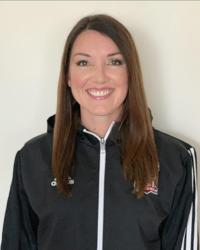 Casey grew up in Folsom, California and started playing soccer for fun at four years old on her older sisters’ teams.  After developing a passion for the game, she moved into competitive soccer and the Olympic Development Program.

She played four years of Division 1 soccer at University of Washington, where she served as the team Captain.  Following college, she played locally for the Olympic Club’s Women’s Soccer Team.

She maintains a passion for the greatest game in the world and hopes to share her love of the game with players seeking to balance competition and fun.  She tries to enhance the mental toughness and feistiness of her players, while maintaining a nurturing and positive environment.

She focuses on individual technical skill development, pitch IQ, and team tactical development, balanced with foundational knowledge in the areas of strength and agility training, ACL-injury prevention, relaxation, breath control, visualization and nutrition.  She encourages risk taking and failure and guides her players in learning from their mistakes and being accountable for their own development, with a growth mindset.

Casey currently lives in San Francisco with her two daughters who are both very passionate about soccer.