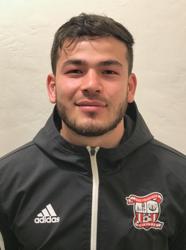 "My coaching philosophy is 'no players left behind', meaning regardless of the team level I am coaching, we are only as good as our weakest link, therefore as a coach it is my responsibility to create a learning-efficient environment for the children to ensure their highest potential as soccer players."

Mo began playing club soccer at the age of six years old with Yashlyk Youth Club in his home country of Turkmenistan. He also represented the Turkmenistan youth national team up until the age of 16. He also managed to play on a variety of his school teams between this time.

At the age of 16, Mo began playing as an academy player graduate for FC Aşgabat. FC Aşgabat is a first division professional soccer club located in Turkmenistan.

Upon moving to America, Mo attended and played soccer at Holy Names University. He played all four years of his attendance, primarily as a Left Back and Center Defensive Midfield player. Mo graduated from Holy Names with a BA in Sports Management, and an MBA in Marketing.

Mo also works for the Oakland Roots, a professional soccer club in Oakland that is partnered with the SF Vikings.