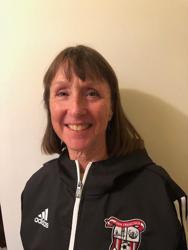 Barbara Moulton has been with the SF Vikings since 2010, starting as a volunteer and becoming a coach in 2011. She has coached every level of play with the Vikings, from Microsoccer to Travel teams. She currently heads the G2011 group, coaching Red Travel, as well as G2010 White Upper House, and Second Grade Boys Recreational Wolves teams.

Barbara grew up on the coast of Maine in the 1960s and 70s, and at that time there was no soccer for girls (and very little for boys) in her area. She played all the other sports and practiced ballet, but field hockey was her favorite and strongest game in high school, mostly as the center forward attacking player (similar in strategy and form to soccer). She studied Journalism in college and received a Bachelor's of Science Degree in Mass Communication from the University of Colorado at Boulder. Although sports teams at Boulder were beyond her reach, she developed a passion for running, hiking, backpacking, cross country and downhill skiing during her years in Colorado.

Her career in journalism took her from Colorado to New York city, where she switched to book publishing as an editor for HarperCollins Publishers, eventually moving to San Francisco to work in the HarperOne office. Later she opened her own literary agency which allowed her the flexibility to coach. When her son was 6 she took over coaching his SF Recreational soccer team, learning from the game and studying books and videos, and getting her first coaching license from Toby Rappolt.

Barbara coached her daughter's first (kinder) team with the local YMCA. When her daughter came to the Vikings, Barbara worked with her two wonderful coaches, Fernando Picazo and Carlos Escobar, gaining a new appreciation for professional quality coaching. From this experience, Barbara was asked to join the Vikings coaching staff, got her E license, and has never looked back. She has taken many great coaching courses since through the Vikings, including grass-roots licensing, and many programs taught by international premier-level coaches. Her office is decorated with photos of her Viking teams and awards.

Click here to read a more in depth view into Barbara's soccer career, written by Barbara herself!