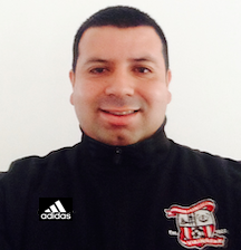 How long have you been playing soccer (or been with Vikings)? What was your early playing career like?

I started playing soccer when I was five years old. I played with the Vikings since I was eight years old, all the way up to the men’s team. I don’t play anymore (competitively at least) because I’ve focused my attention on coaching and my career.

Did you go to school in San Francisco? If so, where?

Yes, I went to Brandeis Hillel Day School through elementary school, Lawton Alternative School for middle school, and Lincoln High School. Brandeis and Lincoln will always have a special place in my heart (when it comes to soccer). When I was five years old, I met Toby and Libby Rappolt for the first time. They taught the after-school soccer program at Brandeis. Toby and Libby made it so much fun, I ended up falling in love with the game as a result of the environment they created.

At Lincoln, I grew tremendously as both a player and person under the leadership of Danny Link. I believe high school soccer was a valuable experience. It was an opportunity to represent my school, improve as a player, and make new friends. For this reason, I encourage my players to play high school soccer. Also, because I enjoyed my experience so much, I decided to return to Lincoln and coach the Varsity Boys’ Soccer team this past Winter. I wanted to give back to the school and create a similar environment for the players that Danny created for me.

What is one of your most memorable soccer moments growing up? Either a game you played, coached, or even watched. What about this memory stands out to you? Has this affected your outlook on either soccer or coaching?

One of my most memorable moments was watching a 1994 World Cup game at Stanford Stadium when I was 11 years old. It was between Russia and Cameroon. My older brother’s best friend, Oscar (who was Russian), took me. It was a very exciting match; Russia beat Cameroon 6-1 and Oleg Salenko of Russia scored 5 goals (which is still the most goals scored by one player in a single World Cup game). It was the first time I got to watch a live international game. It was also amazing to see thousands of people from all over the world come together to show their passion and love for soccer.

When did you make the transition from player to coach? What made you want to make the switch?

My favorite college professor once said, “don’t find a job, find a passion.” I was fortunate enough to find my passion early on in soccer and I’ve followed that passion ever since. Eventually I realized I wasn’t good enough to play professional soccer (which was my childhood dream), but I wanted to stay involved with the game. Coaching was the next logical step for me because I could stay connected to soccer while also supporting myself financially.

What do you love about the Vikings? What has kept you around the club for so long?

The reason I have stayed with the Vikings is because of the people. I consider the club my home and the staff as family. Toby and Libby, who I have known for a very long time, have had a huge impact on my life. They are amazing people and I hope to one day touch the lives of as many people as they have.

Growing up, I had great coaches/leaders, such as Roger Arevalo, Aram Kardzair, and Pat Cadam who are still involved with the club. Jeff Wilson and Daniel Link were also excellent coaches and mentors of mine. I owe a lot to them for helping me grow as a player and coach. Another coach who is still with the club that has positively influenced me is Fernando Picazo. He didn't coach me, but I remember how kind he was to me when I was a young Vikings player.

I also get to work with some of my closest friends and former teammates, Danny Cardoza and Forrest Cadam. Forrest and I played on the same Vikings travel team, high school team, and college team. His father Pat, who I have already mentioned, is like an uncle to me.

I've gotten close with many of the other Vikings coaches (I'm sorry I can't acknowledge you all!). I'm starting to get to know the new coaches. I’m happy to say that our family has grown considerably over the past eight months. I want to especially welcome Jovan Yamagishi, our new executive director. With our excellent management team and coaching/office staff in place, the future of the Vikings is looking very bright.

How does it feel to go from a Vikings player, to coach, to the DOC of the entire club?

I feel thankful for the opportunity to serve as the Vikings Director of Coaching. Not many get to experience this step within a club, so it's an honor to have this chance. It’s definitely not a role that I will take lightly. I’m very excited to take on this new challenge and grow as a person, coach, and D.O.C. under the leadership of Jovan.

I’m also extremely thankful for the club believing in me and supporting me as a player and coach over the years. I would not be the person that I am today, if it wasn’t for the Vikings. I’m going to use this opportunity to give back to the club and help move the club forward.

Are there any other coaching achievements, milestones, or moments that you’re particularly proud of?

The achievement I am most proud of is receiving the U.S. Soccer Grassroots Instructor License.

That course truly pushed me to my limits as a coach, educator, and a person. I chose to get the license because there was a need for more instructors. Currently, there are only 500 or so licensed grassroots instructors in the United States. I also wanted to make a bigger impact. Now I can extend my reach and positively influence thousands of coaches and players.

What also makes me proud is when I cross paths with a former player of mine. When they go out of their way to say hello, it makes me feel like I did something right.

Do you have a set coaching philosophy you follow/implement? Is there anything you think makes a good coach?

I try to create an environment where children can learn and enjoy soccer. I also use soccer as a vehicle to teach life lessons. Both in life and on the soccer field, the children will experience success and failure. I want the children to learn how to handle themselves when things go well and when things do not go the way they want. Lastly, I try to emphasize long-term player/team development over the “win now” mentality.

A good youth soccer coach is player-centered (or parent-centered), meaning everything they do is in the best interest of the players or parents. They also keep the game in perspective and understand that soccer is just a game and a vehicle that teaches more important life lessons. A good coach is also flexible in how they approach each player and is able to adapt the training environment to meet the specific needs of their players. Lastly, a good coach models the behavior that they expect from their players. They demonstrate good sportsmanship, are open to feedback, and continuously challenge themselves.

What are your aspirations for the club, is there a direction you want to take it? What are you excited for?

I want to move the club forward. The competition in San Francisco is fierce so I have been focusing on a couple of tasks to help differentiate our club from the rest. I spent most of the Fall season helping our coaches manage their teams and improve their communication to the parents. Overall, I believe we do a great job keeping parents informed and engaged, it’s definitely one of our strengths as a club. However, there is always room for improvement. I want to continue to raise the bar so that we can give excellent service to our members.

Coaching is another top priority. There is a wide gap between what the science suggests and how coaches actually coach. This is why we have begun to implement the U.S. Soccer Grassroots Methodology, which is evidence-based. We have also adopted ideas from top soccer experts such as Raymond Veriheijen and Todd Beane to help improve the efficiency and effectiveness of our training sessions.

I also want to leverage futsal. Futsal is a fantastic game that can help enhance the technical skills and tactical knowledge of our players. I’ve created a futsal curriculum, a document that I’m very proud of, to aid coaches in teaching futsal. In the future, I would like to develop a competitive futsal program.

I’m really excited for our 100th year anniversary (in two years), we will definitely need to have a big celebration.

Coaches have kept sports alive in 2020. Has your kid's coach helped them through this crisis?Nominate them   for a chance to win $2500!